What is a chloramine? A simplified pool chemistry lesson

You are here: Home / / Main / What is a chloramine? A simplified pool chemistry lesson 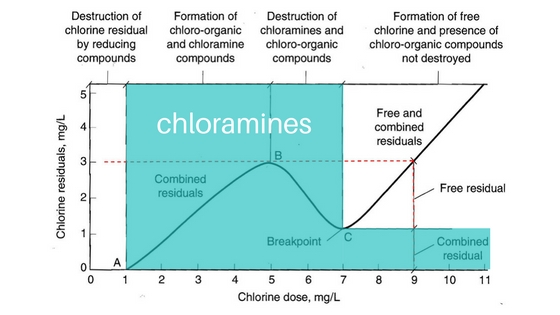 As more chlorine is added to the water, chloramine compounds form while it tries to remove the oxidant demand.

Chloramine byproducts can be health hazards. That’s the main reason ‘chloramine’ is such a buzz word in the aquatics industry. Actually, as this article will explain, chloramines are in almost every form of water treatment–including drinking water.

Because the chemistry of chlorination is pretty complicated, let’s simplify it. When you add chlorine to water (the X axis on the graph above), it has to oxidize its way past contaminants before it can sanitize. The point where chlorine overcomes the oxidant demand is called the breakpoint. Everything after the breakpoint is where chlorine actually begins to sanitize and disinfect, as a free available chlorine (FAC) residual begins to build.

So let’s focus on that oxidant demand (between A and C on the graph above).

Chlorine’s primary responsibility in water is to be a sanitizer and disinfectant. Unfortunately, it is obligated to first destroy the oxidant demand through–you guessed it–oxidation. That would be okay if chlorine were a really good oxidizer…but alas, it is not. Chlorine is great at pool sanitization, however.

So chlorine first reacts with dissolved metals like iron and manganese, which immediately negates the initial dose of chlorine. On the chart, metals account for the first 0-1 on the X axis, showing no residual yet. Once the metals have been overcome, a residual begins to build. This residual builds from points A to B. What’s happening here is chlorine oxidizes nitrogen and carbon-based contamination. There are hundreds of byproducts that can be formed between A and B…but we generally just refer to them as chloramines. But chloramines specifically are monochloramine, dichloramine and trichloramine.

And of course, even further chlorination yields the most noxious of chloramines that off-gasses from pools, Nitrogen Trichloride, aka Trichloramine (NCl3):

Did you know that chloramine byproducts can have some disinfection ability? It’s often misunderstood, but true. Some municipalities even treat their water with chloramines instead of chlorine. Chlorine continues oxidizing other contaminants until it reaches a point (B) where it has overcome free oxidants. It then begins to destroy chloramines. We have tried to find a simple explanation to understand when and why this betrayal happens. All we know is chlorine turns on chloramines–which were once helping it disinfect–and destroys them until breakpoint is reached.

At breakpoint (C), combined chlorine should stabilize. If it doesn’t, it is a sign that breakpoint needs to be reached again to overcome new contamination (more oxidant demand, like a swim team starting practice).

The chemistry of chlorination, explained:

As you read earlier, chloramines go through three forms as more and more hypochlorous acid (HOCl) is added. Mono- and dichloramines remain waterborne, while trichloramines off-gas and become airborne. Trichloramines–another name for Nitrogen Trichloride (NCl3)–are what most people think of. These are the primary culprit for indoor air quality problems in natatoriums. Yes, the same air quality problems that are harmful to our health. Symptoms like rust and corrosion all over an indoor pool and its dehumidification system are very common.

There are some systems and methods to overcome chloramines in both forms.

How to address waterborne chloramines

We advocate for preventative care with use of enzymes, which break down and digest much of the organic contamination before it even becomes chloramine byproducts. That said, no amount of enzymes can possibly prevent all chloramine production, because chlorine will still oxidize what it touches. For already-formed chloramines, you can try:

Be aware that timing is also a factor. UV and ozone are applied in the pump room, and are point-of-contact systems. They do not have much (if any) residual affect beyond the plumbing in the room. Shocking the pool can be circulated effectively…but it is an inefficient method. Sure, it can work, but it takes a lot of chlorine. The race against time is because dichloramines convert to trichloramines and off-gas quickly. The more agitated and warm the water, the faster the off-gassing.

Once chloramines are in the air, water chemistry is irrelevant to them. All that matters now is the mechanical system and good ol’ physics.

How to address airborne chloramines

Trichloramines–and many other disinfectant byproducts–are heavier than oxygen. They displace some oxygen at the bottom of the natatorium (the “breathing zone“), which leads to health problems like swimmers coughing and lifeguard lung. Dehumidification systems are meant to heat, cool and dehumidify air, but they lack the ability to separate “bad air quality” from good air. Fortunately, the gravity of chloramine byproducts separates them pretty well.

The most effective means we have seen for addressing airborne chloramines, by far, is the Paddock Evacuator. It is a source capture ventilation system designed specifically for caustic chloramines. And it works.

There is much to consider when handling indoor air quality for pools, so contact Paddock for more information about it. They evaluate pool facilities to identify what needs to happen to have fresh air. Most facilities have issues with their air handling design–specifically air flow–and without correcting that, airborne chloramines will be a problem.

We hope this article helps you better understand what chloramines are, and how they can be addressed. It is an important issue due to chloramine impact on people’s health and comfort. The less you have, the better.

For more information, reach out to us, or comment below. Thanks for your time.

Enzymes on an automated feed pump